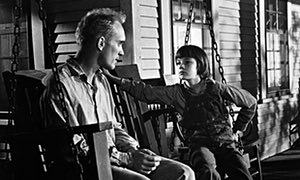 “Good morning readers, and welcome to another post on Flailing Through Life.”

As dialogue, which is preferable? Which grabs attention quickest? Which is most appropriate for your scene? Some of you are experienced writers, so you already have a handle on this aspect of the craft, but we can all do with a little extra topping on the ice-cream sundae of the written word – couldn’t we?

There are a few successful novels and novellas that contain no dialogue whatsoever, Shikasta by Doris Lessing being one of them; the story is presented in a series of reports from an alien who inhabits earth. Another is Bridget Jones’s Diary by Helen Fielding, which is created through diary entries. However today, let’s look at how we make people talk.

Dialogue exists to bring your characters to life, it makes them appear ‘real’, it allows for interaction between characters, it reveals what sort of person he or she is. And if done well, it can make your writing come alive.

I am a massive movie fan, I watch films all of the time, I spent many hours in my childhood sitting indoors on a sunny day, with the curtains partially drawn, watching old black and white movies; mostly British or French. I am a huge fan of Quentin Tarantino films – and his dialogue is perfect.

Take a look at this section from Reservoir Dogs – Mr White does not want to tip the waitress when everyone else has done so:

Okay, everybody cough up green for

Everybody whips out a buck, and throws it on the table.

Everybody, that is, except Mr. White.

I don’t believe in it.

You don’t believe in tipping?

I love this kid, he’s a madman,

Do you have any idea what these

Don’t give me that.  She don’t

make enough money, she can quit.

I don’t even know a Jew who’d have

the balls to say that.  So let’s

get this straight. You never ever

I don’t tip because society says I

gotta.  I tip when somebody

deserves a tip.  When somebody

really puts forth an effort, they

deserve a little something extra.

But this tipping automatically,

that shit’s for the birds.  As far

Our girl was nice.

Our girl was okay.  She didn’t do

What’s something special, take ya

in the kitchen and suck your dick?

So what sort of people are they? Sure, when you watch the movie you can see them all sat around in their matching black and white, but what does this little section tell us about Mr. White? The dialogue is about a mundane subject; tipping, but it is interesting because of the people who are having the conversation as much as anything else; makes it kind of weird (and if you’re like me, then comical) https://www.youtube.com/watch?v=V4sbYy0WdGQ&list=RDV4sbYy0WdGQ#t=0

Tarantino does this repeatedly in his films. We get two or more characters who we know, as the audience, are awful people; killers, murderer’s, punks, criminals and so forth. Then he gives them this dialogue about everyday stuff, it is the Juxtapositioning of dialogue and character expectation that creates interest and tension.

Here’s another. In Pulp Fiction, Jules and Vincent, hit-men for Marcellus Wallace, are in the apartment of some college kids who tried to pull one over on Wallace. It’s payback time. We the audience kind of know this, but what happens is this –

Vincent caught you at breakfast,

Hamburgers. The cornerstone of any

No, I mean where did you get’em?

Hawaiian burger joint. I heard they

got some tasty burgers. I ain’t never

had one myself, how are they?

Mind if I try one of yours?

Yours is this one, right?

Jules grabs the burger and take a bite of it.

Vince, you ever try a Big Kahuna

Jules holds out the Big Kahuna.

usually eat ’em ’cause my girlfriend’s

a vegetarian. Which more or less

makes me a vegetarian, but I sure

love the taste of a good burger.

You know what they call a Quarter

Pounder with Cheese in France?

Royale with Cheese, you know why

they call it that?

Because of the metric system?

Check out the big brain on Brett.

(he points to a fast

Sprite, good, mind if I have some of

your tasty beverage to wash this

Jules grabs the cup and takes a sip.

You, Flock of Seagulls, you know

what we’re here for?

Then why don’t you tell my boy here

Vince, where you got the shit hid.

– I don’t remember askin’ you a

Jules is scary even on the page; he swings from calm burger gourmet to dangerous aggressor and back again in two sentences. Everyone is caught off-guard, which is great for story-telling tension. Why does Tarantino write this dialogue? Why doesn’t he just have Vincent and Jules come in, blow the boys away and search for the drugs? We all know; Vince, Jules, the unfortunate college kids, and us the audience, we all know this isn’t going to end well and the everyday subject of the dialogue draws out the moment until all hell breaks loose. 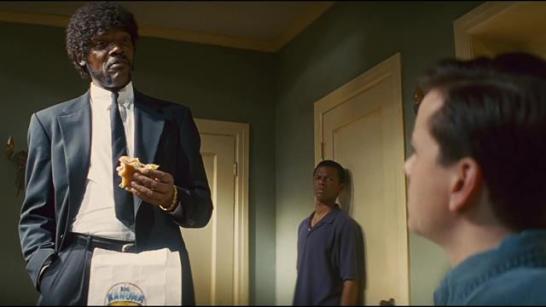 Looking to the dialogue of film-makers, directors and producers and analysing what they have written, why they have written it and the effect it has on the audience, can help revitalise a novelists approach.

And let’s not forget comic/graphic novel writers. They have to get that dialogue to lift off the page as much as the artwork. They often bring controversial ideas to the page, dialogue that can be poetic, or both as is the case with Alan Moore’s,  V For Vendetta.

V: Voilà! In view, a humble vaudevillian veteran, cast vicariously as both victim and villain by the vicissitudes of Fate. This visage, no mere veneer of vanity, is a vestige of the vox populi, now vacant, vanished. However, this valorous visitation of a by-gone vexation, stands vivified and has vowed to vanquish these venal and virulent vermin vanguarding vice and vouchsafing the violently vicious and voracious violation of volition.

In this scene where V introduces himself to Evey, we learn a lot about V – he is poetic, an actor, misunderstood and a freedom fighter, all V’s dialogue.

The comic book writer is a subversive creature, lurking in the darkening corners of publishing houses and saying the things we wish we had said ourselves. Frank Miller takes us into the dark with the likes of Sin City and Batman: The dark Knight Returns. Other comic book writers with snappy dialogue are the ‘cast’ of 2000AD writers, including John Wagner, Pat Mills, Alan Grant, Garth Ennis; some of the writers for Judge Dredd;

Even without any images, we know that Dredd is a hard-nosed, Lawful, humourless son-of-a-bitch, and he kicks criminal ass big time. Forget what you may have heard about kids and comics, if you have never read one, go and buy one or two and read them  and study that dialogue.

Authors who I think give good dialogue!

‘Drink up,’ said Ford, ‘you’ve got three pints to get through.’

The man next to Ford grinned and nodded happily. Ford ignored him. He said, ‘Time is an illusion. Lunchtime doubly so.’

‘Very deep,’ said Arthur, ‘you should send that in to the Reader’s Digest. They’ve got a page for people like you.’

The crime novelist’s dialogue is catchy and snappy, many of his novels have been made into films – Get Shorty, Jackie Brown and  3:10 to Yuma

‘You sure have a lot of shit in here. What’s all this stuff? Handcuffs, chains…What’s this can?’

‘For your breath,’ Karen said. ‘You could use it. Squirt some in your mouth.’

‘You devil, it’s Mace, huh? What’ve you got here, a billy? Use it on poor unfortunate offenders…Where’s your gun, your pistol?’

‘In my bag, in the car.’ She felt his hand slip from her arm to her hip and rest there and she said, ‘You know you don’t have a chance of making it. Guards are out here already, they’ll stop the car.’

‘They’re off in the cane by now chasing Cubans.’

His tone quiet, unhurried, and it surprised her.

Worlds peopled with memorable characters with dialogue that a reader can hear it as if spoken aloud.

‘I forgot,’ Lennie said softly. ‘I tried not to forget. Honest to God I did, George.’

‘O.K.—O.K. I’ll tell ya again. I ain’t got nothing to do. Might jus’ as well spen’ all my time tell’n you things and then you forget ‘em, and I tell you again.’

‘Tried and tried,’ said Lennie, ‘but it didn’t do no good. I remember about the rabbits, George.’

‘The hell with the rabbits. That’s all you ever can remember is them rabbits. O.K.! Now you listen and this time you got to remember so we don’t get in no trouble. You remember settin’ in that gutter on Howard street and watchin’ that blackboard?’

Lennies’s face broke into a delighted smile. ‘Why sure, George, I remember that…but…what’d we do then? I remember some girls come by and you says…you say…’