Brought to you by Jonathan Green, editor and author (of many, many books ranging from Steampunk to Sci-Fi, fusion of classics to Fighting Fantasy titles), who gave us the original ‘Sharkpunk’.  Mr. G and publishers, Snowbooks, are bringing us a second anthology of killer shark stories, with extra bite! 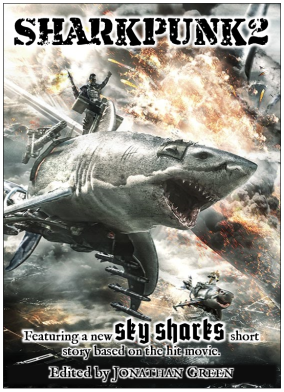 Didn’t want to go in the water anyway…                    but now the skies are no-go too!
Some of the authors from the first anthology will reappear in Sharkpunk 2, and this time I myself might be appearing, though not in the PB version. There was an idea mooted that a Sharkpunk 2.5, an electronic version with ‘extras’, would be published, including stories the editors liked, but could not include in the PB. I was absolutely delighted to have been selected for this possible publication  as I will be rubbing shoulders (or fins) with some actual, real, established authors, including, Gavin Smith, Gav Thorpe and Sarah Peploe.
You can contribute to the publication of this new title by visiting the Kickstarter site tomorrow, midday (GMT).
https://www.kickstarter.com/projects