When I turned 18 (oh so long ago), I got extraordinarily drunk whilst at college. I spewed copious amounts of vomit around the girl’s toilets and had to be taken home by a member of staff and a student. My mother was confused – she did not recognise drunkenness when she saw it, my father thought it quite funny. I was ill for about three days. When I turned 21, my parents turned up at my university digs with a cake, my two main childhood toys (Tiny Tears and Teddy) and a bottle of champagne.

Fairly typical for Many UK young people on the cusp of adulthood; most people I know of my age, also got ridiculously drunk on their eighteenth birthdays. It seems to be the norm here. Celebrations dropped down to 16 after a while, so massive parties and lots of alcohol consumed, usually in the celebrants family home, but more and more people are hiring halls, or restaurants or clubs these days.

So when do we become an adult? What do we do to celebrate and mark the transition from childhood to adulthood? And why are the laws and customs regarding what a teen can and cannot do not unequal throughout England? It seems like other cultures have a handle on this, traditions which continue over the generations and are acknowledged by the whole community. You can have a tooth filled in Bali, do a land-dive in Pacific island of Vanuatu, or be beaten and scarred with the Fulani of Western Africa. But what do we do in England and when do we do it?

For those of you who are not English, let me fill you in –

So let’s have a quick re-cap. At 16 years of age you have to pay adult fares for theme parks and the like, you can smoke cigarettes, but NOT buy them. You can marry with parental consent (so presumably have children), you can join the military, which presumably involves in weapon training. BUT, you have to be with an adult to have a drink with a meal. You must remain in education and you cannot vote. Not forgetting, that legally, YOU ARE STILL REGARDED AS A MINOR. YOU ARE A CHILD! There is little, or no consistency.

Does this picture look skew-whiff to anyone else?! I have been boggled by the age issue since I was 13 years old and I was charged adult price for a ticket for Madame Tussauds Waxworks Museum. I argued for ages with the guy on the counter:

“But I’m not responsible enough to be an adult!”

I paid anyway – wanted to see the wax heads on sticks.

Can we not all agree on what age is the one true age of reaching adulthood? The complications are sometimes related to money. In the consumer age, corporations and conglomerates want your money, regardless of whether you earn any or not. This is a ludicrous situation. Not only can we not agree on set ages for ‘coming of age’, but we don’t now know when to celebrate. So, 16 years old’s celebrate that they have turned ‘Sweet 16’ (So What?! I cry), then 18 year old’s celebrate their ‘coming of age’ – as we have seen already, usually by getting very, very drunk.

Then along comes 21 years. This used to be the age recognised throughout the UK, when a child became an adult. This changed in 1970, in England (1969 in Wales and Scotland). It was a huge moment marked by celebrations, party, gifts and, a once well-known song.

Now we are being told that, mentally and emotionally, we are reaching adulthood around 25 years. So isn’t it about time to have parity across the board? If we are saying that people are minors/children until the age of 18, shouldn’t all laws and charges reflect this? 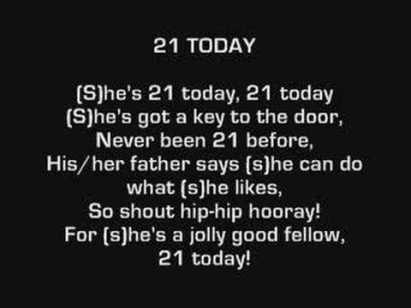 Having something definite to mark this passage provides us with a ‘mental landmark’, we all know where we stand. Make it a real celebration, something that is recognised by all, a ceremony of sorts. A Tradition.

Mazal Tov! Around the world, young Jewish boys and girls celebrate their Bar and Bat Mitzvahs at age 13 and 12 in order to demonstrate their commitment to their faith and recognize that they are now responsible for following Jewish law. After the religious ceremony, a reception  to celebrate the young person’s hard work and accomplishment takes place; as they have often spent weeks learning and preparing for this day.

In Amish tradition, Rumspringa marks the time when youth turn 16 and are finally able to enjoy unsupervised weekends away from family. During this time, they are encouraged to enjoy whatever pleasures they like, be that modern clothing or alcohol. The purpose of this period is to allow Amish youth the opportunity to see and experience the world beyond their culture and upbringing. It also recognises that youthful exuberance exists and needs to be allowed to happen. In this way, returning to their community and way of life thus is entirely their choice. Those who return are then baptized and become committed members of the Amish church and community, marking the end of Rumspringa (but they must do so before turning 26).

In North Baffin Island, Inuit boys have traditionally gone out to the wilderness with their fathers between the ages of 11 and 12 to test their hunting skills and acclimatise to the harsh arctic weather. As part of the tradition, a shaman would be called to open the lines of communication between men and animals. Nowadays, this tradition has been extended to young girls as well, as “out-camps” are established away from the community in order for traditional skills to be passed down and practiced by the young men and women. 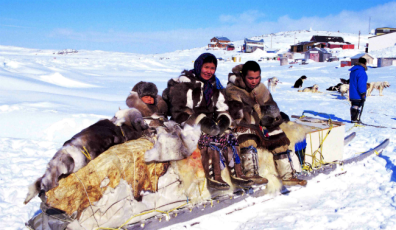 In Malaysia, 11 is a special birthday for some Muslim girls, as it marks the time when they can celebrate Khatam Al Koran, a prestigious ritual that demonstrates their growing maturity at their local mosque. Girls spend years preparing for this day, reviewing the Koran so they can recite the final chapter before friends and family at the ceremony.

The Maasai of Kenya and Tanzania have several rites of passage that carry boys into manhood. Boys between the ages of 10-20 come together to be initiated as the new “warrior class” of the tribe, placed in dozens of houses built for the occasion. The night before the ceremony the boys sleep outside in the forest, and at dawn they return for a day of singing and dancing. They drink a mixture of alcohol, cow’s blood, and milk, while also consuming large portions of meat. After these festivities they are ready to be circumcised, making the official transformation into a man, warrior, and protector. Similar to other rites of passage the boys cannot flinch, because doing so would shame their families and discount their bravery.

In Japan, the second Monday of January marks a special day- the day in which 20 year olds get to dress up in their finest traditional attire, attend a ceremony in local city offices, receive gifts, and party to their hearts’ content amongst friends and family. It’s their Coming of Age Festival, otherwise known as Seijin-no-Hi. The tradition started nearly 1200 years ago and recognizes the age when the Japanese believe youth become mature, contributing members of society (it’s also the time when they get to vote and drink).

It is interesting to note, that whilst I was searching for images to represent each culture’s way of celebrating this rite of passage – I could not find anything to represent the UK. There were very mixed images of different types of parties, the odd one of teens drinking or smoking, but no consistency – because we have no recognisable, traditional way to share and enjoy. This will have to suffice…