With an exotic name like, Mehitobel, one would expect something out of the ordinary – and she does not fail to deliver.

This is the first book I have read by Mehitobel Wilson, so I cannot make a comparison to other titles.

‘The crumbling Blue Alice has been gathering ghosts for over a hundred years. Once a grand mansion, it was converted to a rooming house in the 1920s. Tenants throughout the century since have suffered violent poltergeist attacks by a vengeful spirit, complained of a spectral woman in black who looms and leers at their every move, reported hearing music when there should be none playing, and appealed to exorcists when tormented by a judgmental demon.’

The protagonist, Mollie Chandler, is in training to become a psychopomp – yeah, I had to go and look it up too. For those who don’t already know: psychopomp ˈsʌɪkə(ʊ)pɒmp/

noun: psychopomp; plural noun: psychopomps; noun: psychopompos; plural noun: psychopompoi(in Greek mythology) a guide of souls to the place of the dead. The spiritual guide of a living person’s soul. “a psychopomp figure who stays by her and walks in her dreams”
So, Mollie is at the end of her training and must go to The Blue Alice to, do what? Rescue, chase out? Prevent? I’m not telling. If she gets it wrong, she could end up worse than dead. Initially, I was a little confused as to who was dead, if they were dead, and who or rather what, the none dead are. I understand they are Glymjacks – I’m going to let you look that one up yourselves – but are they living, breathing human beings, like me?
I have found, over the years, that Americans are far less frightened of words than the English. And here we can see Wilson’s Southern roots, or influence of, in her beautifully painted passages. She never seems at a loss for the right word, it is as if she has somehow, grown the stories, in a swampy, South Carolina compost. I love her description, in the first page, of the Blue Alice itself – 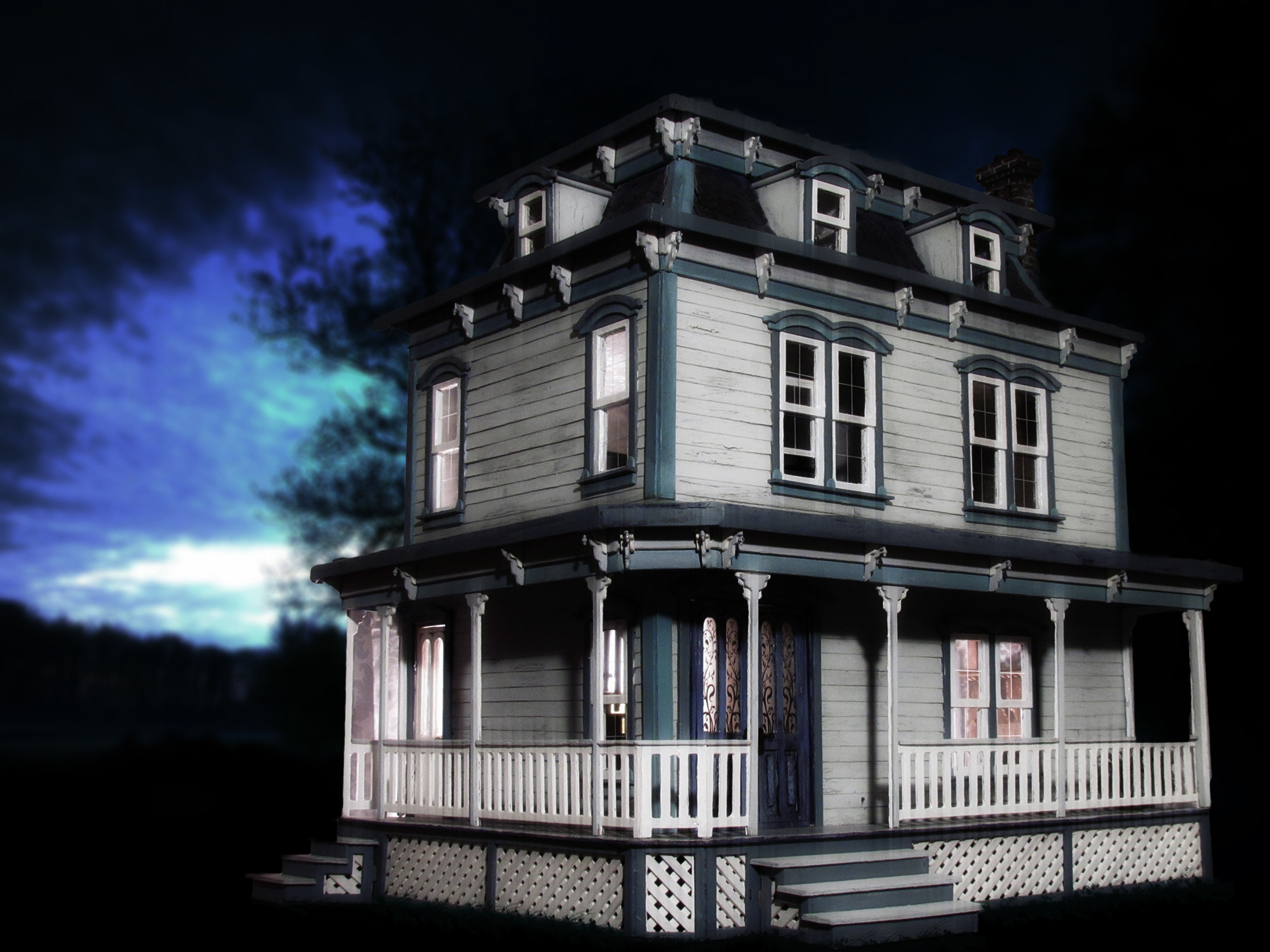 Mehitobel Wilson’s Blue Alice
“But at dusk, just as the sun falls far enough below the horizon to withdraw all its gold from the landscape, the Alice turns blue. And then, just for a few moments each night, its blue blends into the twilight so completely that the house appears to vanish.”
I’ve seen photographs of these houses in America, based on the original English Victorian style, but with the beautification of being made from wood, then painted delightful, creamy colours (that have only just recently made their way across ‘the Pond’.) They lend themselves so well to spooky goings on.
I have bookmarked more stories by Mehitobel Wilson for future reference.
http://mehitobel.com/
P.S: I must add. Something has gone awry with WordPress page layout. I am unable to create spaces where I want and the size I want between paragraphs – please don’t think I am a lazy layer!!!!

Thank you all for your love and support. It meant the world to us.
This is what you will see if you visit: http://ramrampublishing.com/index.html
An online ‘magazine’/publishing company, that gave opportunity to many new up and coming authors. Sadly, RRPI just closed its doors.
I do not know the reason, none was given – it could be personal, financial, whatever, but I hope no-one got hurt in the process.
I am sure there are hundreds of such magazine, the competition must be fearsome. I had a short story published in, Collective Ramblings, Volume 1, ‘ZIP’ – about a race set in some future Earth; if you’re interested.
RamRam gave us some intriguing themes at times, and allowed us to let our memories run away with themselves. They had a Facebook page, a Twitter feed, an Authors online ‘Café’, where ideas could be exchanged, questions asked and help and advice given freely.
Now it is all gone, I wonder how many such little endeavours fall by the wayside each year?
I wonder, why is it so hard for these businesses to survive? Is it simply because there are so many of them, or maybe, just maybe – the dark thought occurs – there just aren’t enough writers who are good enough to fill their pages!!!!!
RIP, RRPI

Some snippets now, on how to be a better writer. There are so many people out there writing, it just makes it harder for editors/publishers to sift through the nonsense.

I grew up in a time when it was considered okay to be a winner, and that therefore there would be losers. I studied sculpture at university, but my degree means nothing; who needs artists when we have the TV and cinemas?!

Now, however, everyone can be a bloody artist! We all have the right to be creative and then force our dross onto others. I’m just hoping that my dross is better than other peoples.

So, what do the ‘real’ writers advise us?

I didn’t want to put too many down here, I’m sure you can go research your own. I just thought I would share some hints and tips I try to work by, try being the operative word.