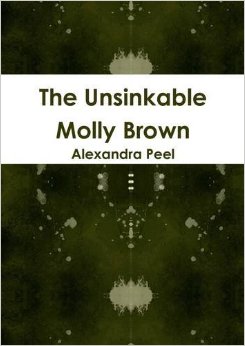 Molly Brown, a runaway orphan heads out to sea as the unlikely Captain of a Pirate ship. Meeting new and unusual friends on the way, including a talking cat, she is a fearless, imaginative and feisty girl. Aimed at readers aged 8 to 12 years.

A number of years ago a film hit the big screens – a story of love, bravery, inspiration and the British class system – that film was Titanic, starring Leonardo DiCaprio and Kate Winslet. I thought it was a disaster – much like it’s theme of the titular, doomed vessel. It began me on one of my mini obsessions. I began reading about the real Titanic, its construction, the men involved in its design and realisation, the great day of launch and the journey. A huge, stylish floating village with everyone in his or her place. The nobs at the top, the poor Irish in the lower decks and engine room. We all know what happened. But one person really stood out for me, Margaret Brown (July 18, 1867 – October 26, 1932). She  was an American socialite, philanthropist, and activist who became famous because of her survival of the  of the Titanic disaster.  She took command of the lifeboat she was placed into and demanded the crew of the lifeboat to return to look for survivors.  She became known after her death as “The Unsinkable Molly Brown”, and her image loomed large in my mind. Wasn’t this the sort of role model/heroine our young girls should look to, not the skinny models and ego fragile celebs flaunted daily in the media? And so I wrote my book for my daughter. It took a long time – too long. By the time I decided to self-publish, she was too old to read the printed copy, but she did act as my proof-reader when she was a child. Bless her.

3 thoughts on “The Unsinkable Molly Brown”